In pursuit of purpose.
How one Latinx leader broke ground on a monument honoring her immigrant family – and found common ground in the process.

Atlanta, Georgia — Isabel González Whitaker is a journalist, an advocate, a mother, a daughter, and a first-generation American. She is also one of the hundreds of Presidential Leadership Scholars. Each year a new class of around 60 scholars participate in this unique program to learn lessons from past presidencies and apply them to improve the world around them.

In the fall of 2017, after years of writing feature stories for the New York Times, InStyle, and the Washington Post, Isabel was looking for something more. She left New York, and began plans to dedicate herself to a project close to heart. That’s when she applied to become a Presidential Leadership Scholar.

Each year, the presidential centers of George W. Bush, William J. Clinton, George H.W. Bush, and Lyndon B. Johnson bring together established leaders from across the nonprofit, military, public, and private sectors to learn firsthand from these four presidencies. The Presidential Leadership Scholars program produces bold and principled leaders who are committed to solving society’s greatest challenges, both domestically and around the world.

Photos from the field

Using an innovative curriculum coupled with an unparalleled opportunity to join a diverse network of changemakers, the program sharpens the Scholars’ skills and introduces them to new ideas and ways of thinking. The six-month program is just the beginning. Scholars are connected to a lifelong network that spans geographic, professional, and societal boundaries to apply lessons learned to improve their communities, our country, and the world.

Fifty years ago, Isabel’s family fled a firing squad in front of Cuba’s infamous paredón – The Wall. Now she’s tearing down walls and building something new through her work with the Presidential Leadership Scholars.

In this first-person essay, Isabel tells the story of her decision to change career paths, her journey in the program, and the factors that ultimately led her to her current role as St. Jude Children’s Hospital’s first director of corporate social responsibility.

In 2008, I had to dig deeper than ever before, in search of a resiliency I wasn’t sure that I possessed. That was the year I unexpectedly lost my mother and then my brother a few months later. Coming from a small, tight-knit exile family, there were days I didn’t think I would recover from the shock of their deaths nor adjust to life without them.

My mother fled Cuba in 1960 after her family was denounced as counter-revolutionary by the incoming government, a threat that for thousands of Cubans resulted in death by firing squad in front of the infamous paredón – The Wall. She departed Havana covertly with two young children, my brother and sister, arriving by ferry in Key West, not speaking the language and intending to return to her beloved island a few months later once tensions subsided.

That island peace never came, and my 24-year-old mother, unprepared but determined, forged a new life in the United States to provide for herself and her children. Like most immigrants, then and now – she faced profound challenges as she adjusted to a new world.

That’s why her ascent as a Hispanic, minority, and immigrant rights advocate in the Deep South, where she ultimately settled, was all the more remarkable. Her “accidental life” as she often called it, took her from a failed Cuban restaurant owner in Atlanta to the president of the Georgia Hispanic Chamber of Commerce where she became a powerful and well-respected voice of equity and dignity for the community.

When my mother died, I knew I would honor her legacy of resilience, perseverance, and advocacy with a memorial in our hometown of Atlanta. My resolve strengthened when her firstborn, my brother, also died.

Probably not surprising to anyone who knows me, I got the memorial – a park renamed after her – done in a matter of months. The Sara J. González Memorial Park debuted in 2009 and is located in a historically Latinx neighborhood near where I grew up. Notably, it is the first park in the state of Georgia named for a Latino. My tenacity coupled with my mom’s reputation meant laws were amended, legislation passed, and the community coalesced to make it so.

“I acquired the skills and network to accomplish so much more than I set out to do with my mom’s namesake park.”Isabel González Whitaker

Presidential Leadership Scholars and the path to relentless inclusivity

Several years later, after my son was born, the climate of politics changed thanks to divisive rhetoric becoming the norm and the minority communities that my mother had once given voice to receding into the margins. I started to think in earnest about what Sara J. González Memorial Park could mean for the community it served and for Georgia.

Thanks to an initial capital investment from an engaged community member and my simultaneous acceptance as a Presidential Leadership Scholar, it was time for me to revisit the park’s purpose and potential. How could this inchoate park that was once my beacon become a beacon for the community through its celebration of my mother’s lodestars: diversity, inclusion, community, and equity.

It was through the Presidential Leadership Scholars that I developed a vision and strategic plan to make that dream happen.

“Community benefits from diversity. Be relentlessly inclusive.” When President Clinton shared that sentiment with our cohort halfway through our six-month academic program, I knew then I would focus on inclusion as a primary tenet of the park. That lens would distinguish the park from others, through which I could provide equity to the community with features such as an all-abilities playscape, ADA-compliant wheelchair access throughout, a community plaza, a mini soccer field, a Learning Nook (the first in the state), and an ethnobotanical community garden to be dedicated to the first Latinx Atlanta police officer to be shot and killed in the line of duty, Officer Edgar Flores. 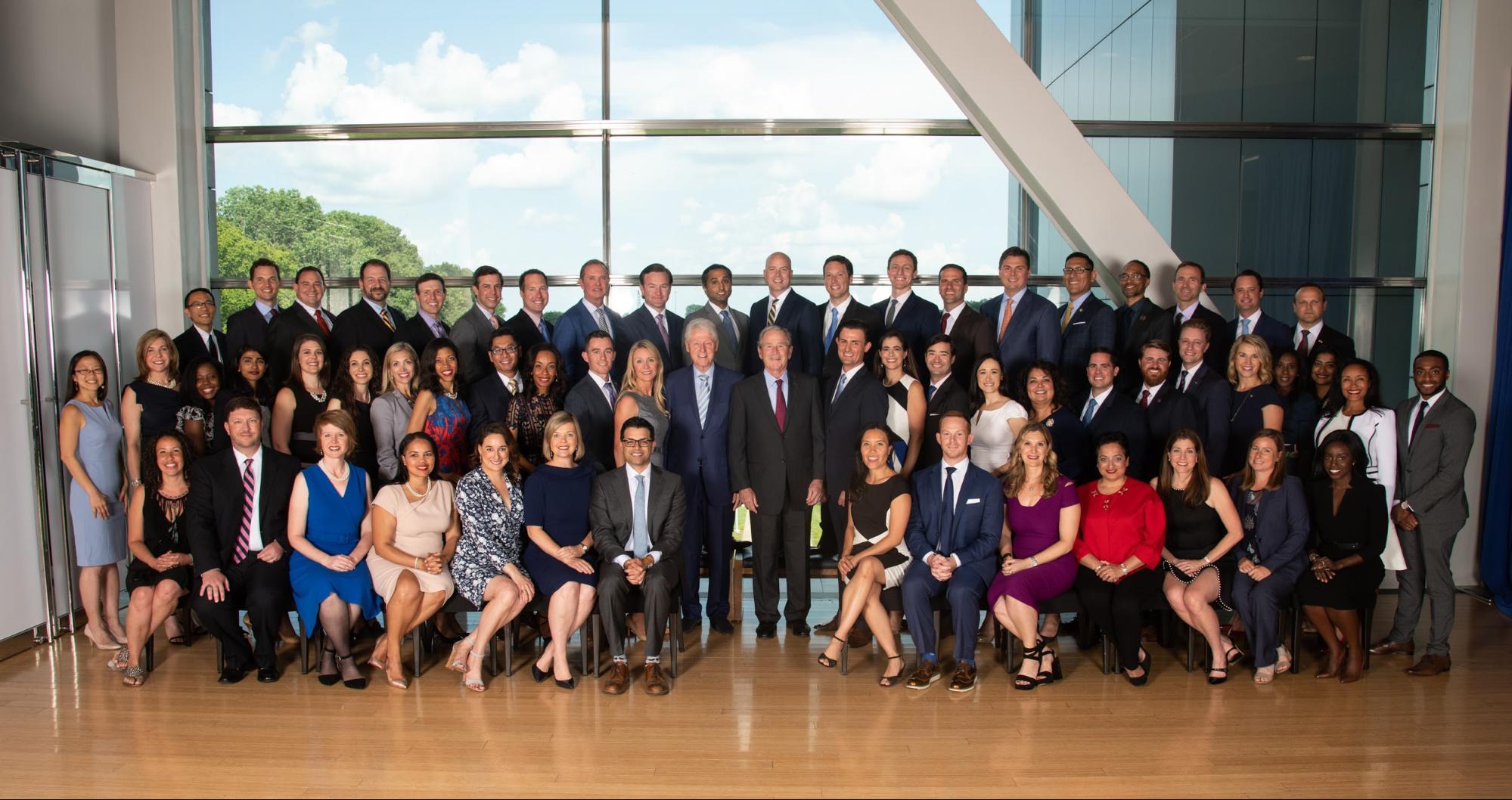 I found other ways to deliver on the theme of relentless inclusivity thanks to ideas shared and debated with my peers in the Presidential Leadership Scholars. I held an interfaith vigil at the park with ten religious leaders who offered spiritual support to the community around the time of the family separations at the border, and another time we held a fun hard hat tour for all the families in the neighborhood. To see Latinx families come together with new neighbors of this gentrifying neighborhood was satisfying, especially when contrasted to the divisive political rhetoric of the day.

We debuted the enhanced park in October of last year but the journey didn’t end there. As a journalist in New York focused mostly on celebrity for nearly 20 years, I had been longing to pivot toward a career defined more fully by social good. Through the Presidential Leadership Scholars, I acquired the skills and network to accomplish so much more than I set out to do with my mom’s namesake park.

A shift to the social impact sector

Because of the success of the park, I developed the confidence that I needed to enter the social impact sector professionally. When I was approached at the end of last year to apply for the first ever role of senior advisor of Corporate Social Responsibility, for ALSAC/St. Jude, the children’s research hospital founded by philanthropist and actor Danny Thomas, I knew I was ready for this opportunity.

In addition to being founded by a first-generation American, St. Jude Children’s Hospital was the first integrated hospital in the South and helped drive desegregation in Memphis in the early 1960s. That foundational inclusivity continues to be reflected today with a diverse patient population whose resilience in the face of life’s ultimate hardships I recognize and honor. And as the hospital remains focused on its mission of “Finding Cures. Saving Children,” having helped push childhood cancer survival rates from 20% in the 1960s to more than 80% today (and now with an additional goal of improving rates globally in collaboration with the World Health Organization), it also aims to deliver on impactful social good for its workforce and the communities it touches.

A relentless commitment to diversity, inclusion, equity, sustainability, and community are all values I have long cherished thanks to my mom. Through the Presidential Leadership Scholars and my new journey with ALSAC/St. Jude, I get to live and honor those values daily.